A few weeks ago, I headed to Dallas with five friends for a Girl’s Night Out.  We were going see my favorite boy band, New Kids On The Block.  (Joining them was another band, The Backstreet Boys!)
This was my first time to see them in concert….something I have waited for for the last, oh, 20 years!  My group of six made matching shirts that were sure to let everyone know “I <3 NKOTB”.  If I had a pin with Jordan’s picture on it, I would have put that on, too. (I do have the set of NKOTB “Barbie” dolls, though.)
Anyone who is familiar with NKOTB knows the names Jordan Knight and Donnie Wahlberg!  (Yes, ladies, Donnie removed his shirt a few times during the concert.)  There is something about that band that still makes 30 year old women have a great time!  Whether it was the band or the friends or a combination of the two, it was absolutely one of the best concerts I’ve attended! 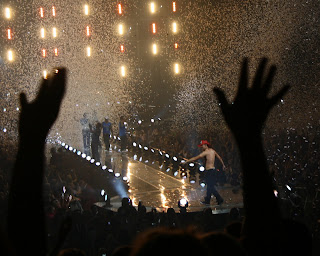 Though none of us had probably heard a NKOTBSB song in years, from the second the bands started to play, we knew every word.  EVERY word.  The stadium was filled with women (and a few good men), who were either screaming, crying, dancing, singing or passed out.  It didn’t matter if you were married, single, a Mother or a Father….you were instantly brought back to the year 1989.

It was a great night, and a great concert!  I can almost guarantee that everyone in that stadium had a wonderful time, including those on stage.  Thanks, Backstreet Boys and New Kids On The Block!

Things To Do With Kids At The Fort Worth Stockyards

Free Father’s Day Printable Card – One In A Melon