This summer, we were invited to visit San Angelo, Texas and take over the city for the weekend. Since I’m from Louisiana, it’s safe to say that my family is still making our way around Texas, so it was nice to drive west and see just what was in store.  We enjoyed the short road trip and later explored the area, where we found beauty, good food, kind residents and family fun.  As an influencer on the Texas Travel Talk team, I am happy to share this list of free things to do in San Angelo Texas.

5 Free Things To Do In San Angelo, Texas

Sheep Spectacular
One of the first things my children noticed about San Angelo was the statues of sheep displayed in front of many of the local businesses.  We started counting them as we passed but became distracted by the sheep’s artwork, which is different on each one.  We soon found out that these fiberglass statues were decorated by local artists to commemorate San Angelo’s historical importance as a wool marketing center.

In 2007, to honor the Miss Wool of America pagent, the local nonprofit, Downtown San Angelo, came up with the Sheep Spectacular.

“The whole idea behind the Sheep Spectacular was to truly honor our heritage in San Angelo,” said Brenda Gunter, vice president for Downtown San Angelo, and owner of Miss Hattie’s Cafe & Saloon. ” San Angelo was known as the wool capital of the world, and it is still an important economic base to the city.”

You can definitely take a few hours to see how many selfies you can take with the sheep.  Or, if you have time before heading out, create a scavenger hunt to find “a red sheep” or “a sheep disguised as money”.   According to this list, there are 48 sheep around the city, but some may have been added since it’s publication.

Kids Kingdom
Kid’s Kingdom is a huge playground that is near the city’s Visitor’s Center, along the Concho River. 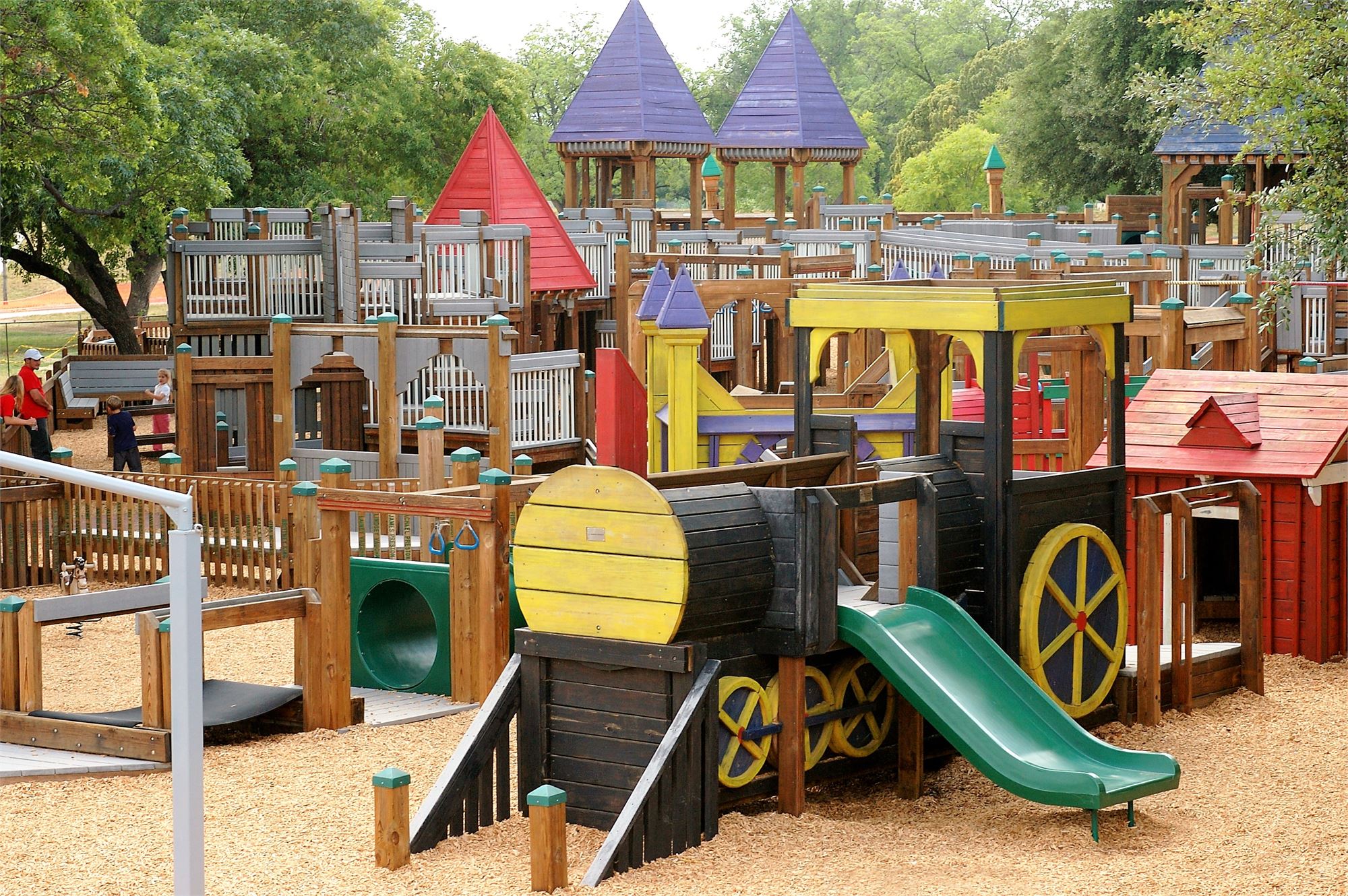 A few things that stuck out were the durable wooden structures, restrooms, picnic tables and shade!  (We visited in July, and it was HOT!)  Make sure you bring water if you plan to stop for a visit.

Visitor’s Museum
Near Kid’s Kingdom, you’ll find an amazing Visitor’s Museum.   I’m so glad we stopped by the Visitor’s Center because not only did they have (free) coffee, they had brochures and helpful information on local attractions and other areas in the state.

But don’t step inside and leave – Make sure you walk through the breezeway to the Concho River in the back because the view is one not to be missed!  (Trust me!)

The art, sights and calming feeling that graces you as you step into the garden behind the Visitor’s Museum is truly unforgettable.

This collection is the life work of Ken Landon, a man with the mind of a scientist, the heart of a poet and the soul that embodies preserving waterlily heritage for generations to come.  You’re sure to see both old favorites and new additions on each visit to the collection.

Fort Concho
Fort Concho is a National Historic Landmark site located in the heart of San Angelo.  It was established in 1867, along the banks of the Concho River, built to serve as regimental headquarters for some of the most famous frontier units like the 4th and 10th Cavalry. Notable military commanders such as Ranald Mackenzie, Benjamin Grierson, and William ‘Pecos Bill’ Shafter commanded here. Elements of all four regiments of the Buffalo Soldiers were stationed at the post during its active period.

At full strength, Fort Concho supported 400-500 men made up of companies of infantry and troops of cavalry, staff officers and support personnel.

In June 1889 the last soldiers marched away from Fort Concho and the fort was deactivated. After almost twenty-two years Fort Concho’s role in the settling of the Texas frontier was over.

Today, Fort Concho National Historic Landmark encompasses most of the former army post and includes twenty-three original and restored fort structures. The old frontier army post is now a historic preservation and museum, which is owned and operated by the City of San Angelo, Texas.

Fort Concho is a great place to soak up some history and give your children a bit of educational fun.  Many of the buildings were open for exploring, and I was excited to see not much could be broken, as many artifacts are displayed up in cabinets.

For more information on San Angelo, Texas and to see other opportunities for exploring the city, make sure you visit Discover San Angelo online and connect on facebook!

Dinosaurs At The Fort Worth Museum Of Science And ...
What To Do For Spring Break In Dallas, TX
Get FREE Tickets To Medieval Times At The Upcoming...
Tweet
Pin157
Share248
405 Shares