I love cheesecake. I like it plain. I like it with strawberries, and I like it with that famous combination of caramel, pecans and chocolate!  Turtle cheesecake is my family’s favorite, too… and because of that, I’ve had to learn to make it at home before we became permanent residents at the Cheesecake Factory!

Don’t let homemade cheesecake intimidate you, though.  I love to bake, but if you would have told me 10 years ago that one day I’d stand in my kitchen making the best turtle cheesecake from scratch, I’d of laughed and fell down right then and there — probably with my whisk in my hand.  This recipe is easy and the preparation is well worth it! 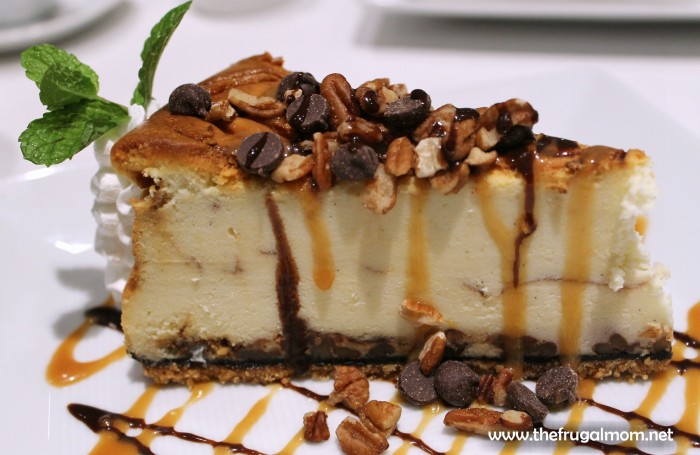 Mix together graham cracker crumbs, sugar and melted butter.  Press the mixture into the bottom of an 8-10″ springform pan. Bake in a 325 degree oven for 8 minutes.  Let cool.
*TIP: I like to put the springform pan on a baking pan to catch drips.

After the crust has cooled, pour 1/2 cup caramel or chocolate sauce on top of the crust.  Sprinkle on 1/2 cup of pecans.  Refrigerate for 10 minutes.  (Start on the filling 5 minutes after crust has started to chill!)

In a medium bowl, mix cream cheese, sugar and vanilla until smooth; scraping side of bowl often.  Add eggs, one at a time, mixing well after each addition.  Pour this mixture over the caramel layer on top of the crust.

Bake at 325 degrees for about 40-50 minutes, or until center is set (no more jiggles!)
*TIP: Use that baking pan to catch drips!

Let cool at room temperature and then refrigerate 4 hours or overnight before removing from the springform pan.

Before serving, arrange pecans around the outside edge of the cheesecake.  Drizzle the top with melted caramel, hot fudge and chocolate chips.  Store remaining cheesecake in the refrigerator.

Things To Do With Kids At The Fort Worth Stockyards

The Best Recipe For Guacamole